Can Calcavecchia’s Putting Tip And Putter Change Work The Same Magic For Me ? 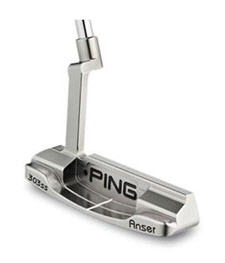 We all remember the magical putting and play by Mark Calcavecchia that won the PODS Championship back in March.

He had two putters in his camp that week. A prototype that Ping had sent him and a Redwood Answer that he’d bought in a store because it felt good.

Well, I’ve got the same symptoms that the 26-year PGA Tour veteran suffered from – none of the putters in my camp, and there are many, many in there, feel good to me.

I’ve hit the ball well most of the year, but my putting has sucked out loud.

Back in March, Calc said, ” I was in a major putting slump. And we all know the story about the putter, the store bought putter, and it looked good to me. It’s called a Ping Redwood, which is their milled version of their Anser, which Scotty Cameron and everybody else in the world copies. But it looked good to me, and I figured something out.”

When I read that, and I admit to scouring the ‘net looking for divine intervention with my putting, I searched high and low for the tip and finally found it –

” I guess it was Friday morning, when I was hitting some putts on the putting green. For some reason it dawned on me to pull more with my left hand. So then I kind of loosened up my right-hand grip and tried to putt basically left-handed with my right hand just on the putter for guidance, and here I am.”

The Redwood series, which came on the market in late 2006, is milled from 303 stainless steel. Three models are available — the Piper S, the Zing and the Anser, which Calcavecchia used. The putters got their name from Ping founder Karsten Solheim’s home in Redwood City, CA, where he made the first Ping putters.

” I just kind of look at it and see which one looks less ugly to me, “ he said about choosing which putter he will use for a round. ” It’s basically what I putted with all of my career, just that it’s an Anser. ”

As you might imagine, Calcavecchia plans to keep the Redwood in play.

” It earned it’s way for quite a while I think, “ he said. ” Hopefully I can just keep with the same thoughts and feel that I had the last three days. It’s earned bag time for a while, even if it goes south. I know I like the putter, and I know I can putt with it, so that’s about three-quarters of the battle. ”

By the way, he sent the prototype back to Ping.

Now, I’m off to find a golf equipment store and see if I can find one that “feels” good to me.